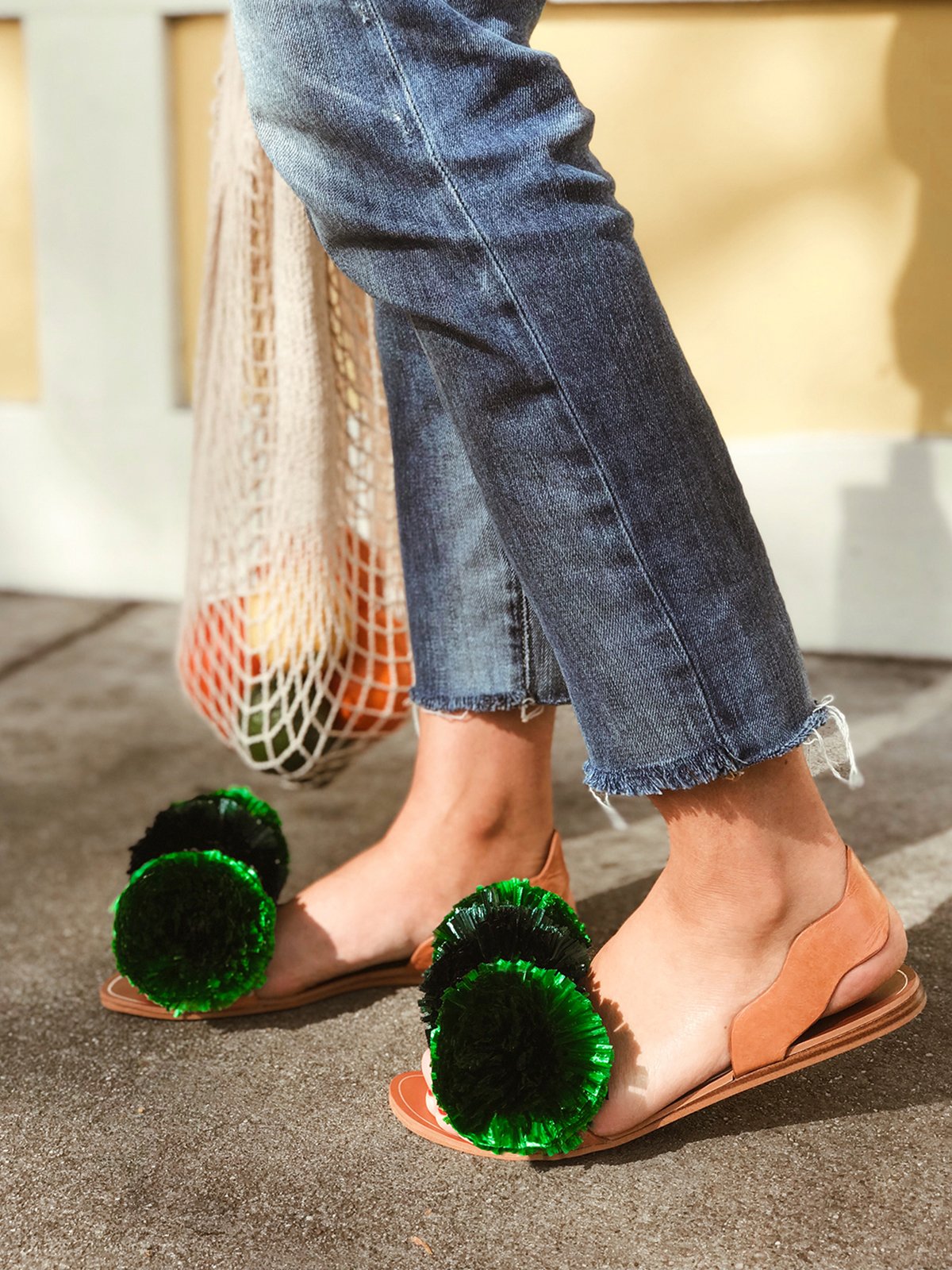 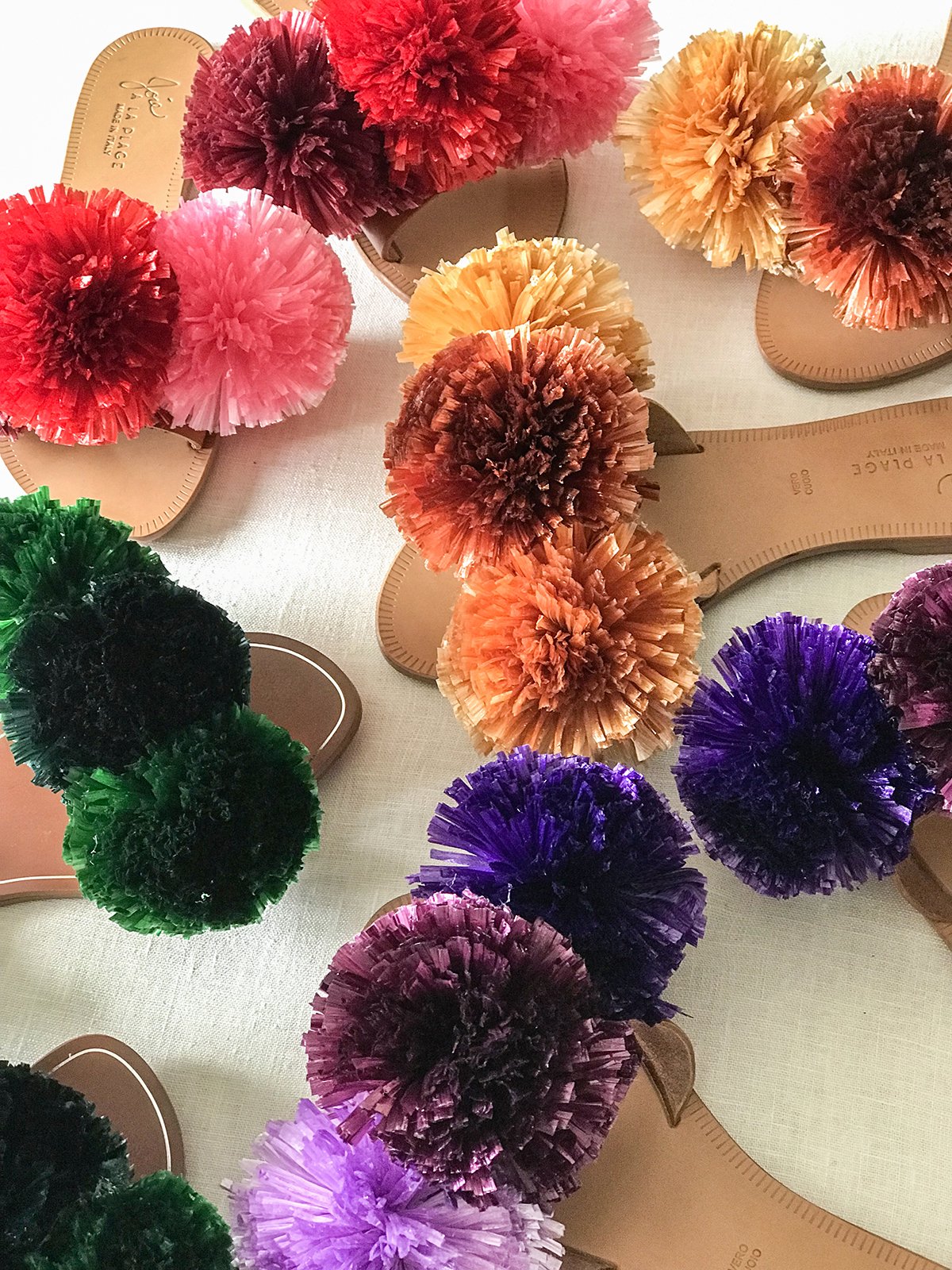 Spring is here and do you know what that means? It's pom pom season! As you know by now, pom poms and I go wayyyy back. There really isn't anything I haven't pom pom bombed. Disco pom poms on shoes, pom poms on pillows, pom poms on bags and clutches, raffia pom poms on baskets . . . but giant raffia pom poms on sandals? Brilliant! However, not my idea. I recently spotted Italian label Avec Moderation's Bora Bora sandals and immediately wanted them - in every color. But for over $350 a pair, I knew this was a project just waiting to be DIYed. 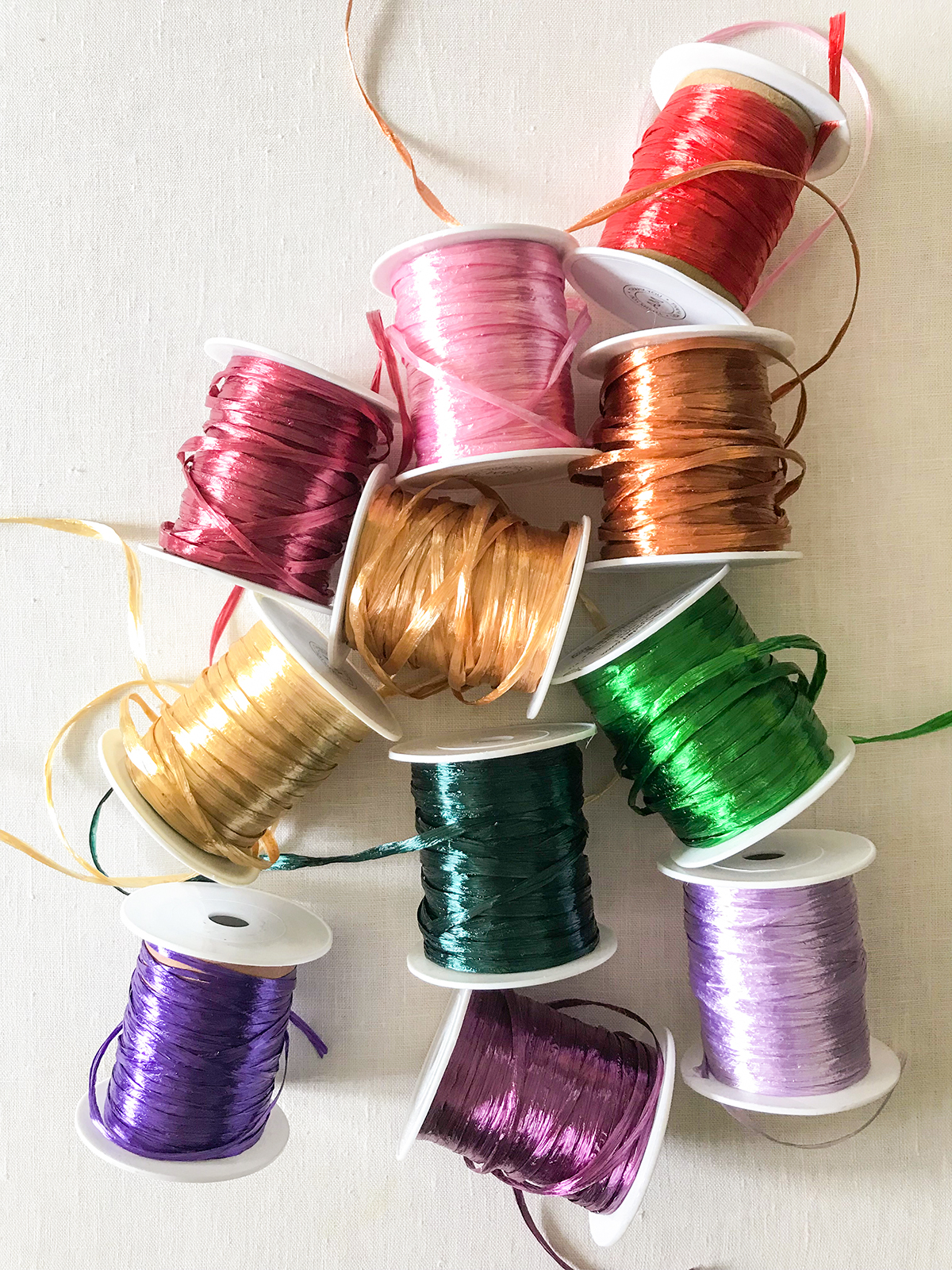 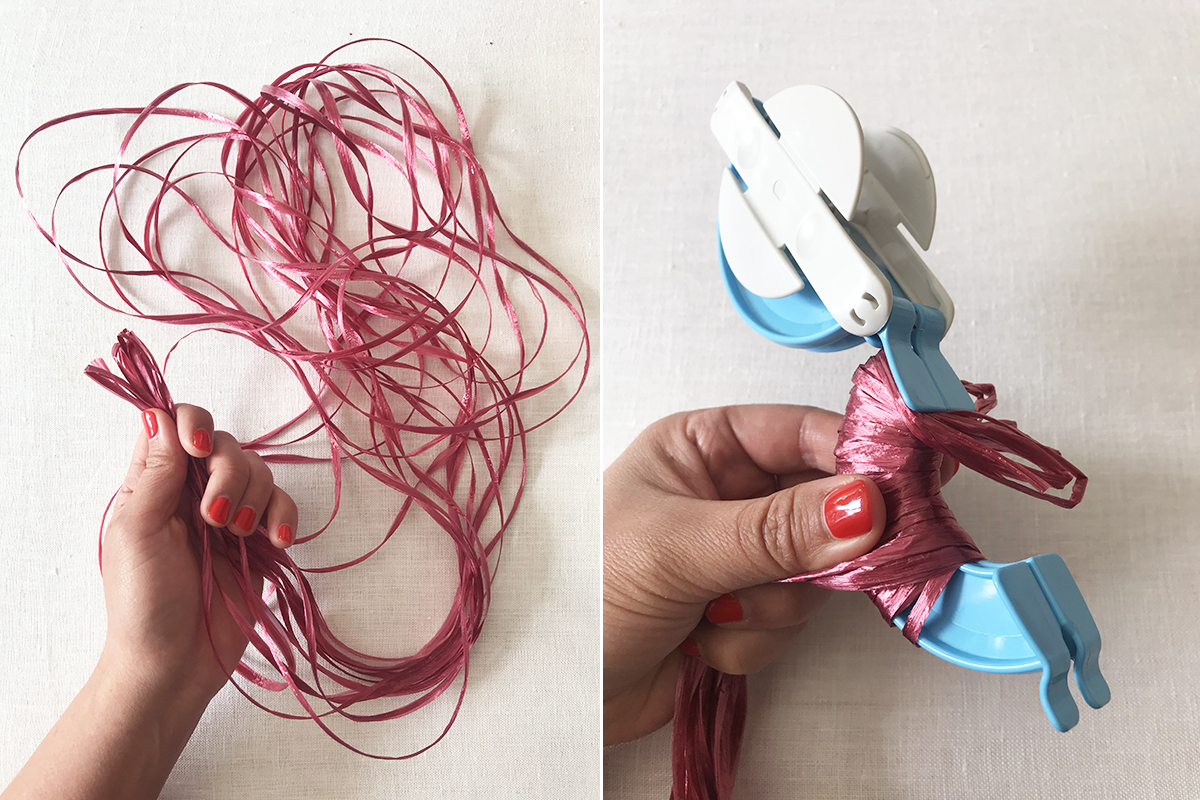 Inspired by the Avec Moderation version, I wanted to keep the pom poms rather large so I used the 3 3/8" pom pom maker. However, if you want make a pair less dramatic, you can use the 2 1/2" pom pom maker instead. Another option is to just purchase pre-made raffia pom poms here, if you're just looking to skip the pom pom making altogether. No judgement! Back to the handmade pom poms. I found that each spool of 100 yard raffia will make about three 3 3/8" pom poms. I like using 3 different shades of the same color per pair of sandals. And remember, you'll need 6 pom poms per pair. To start, pull about 10-12 double arm lengths per pom pom. I literally extend both arms as far wide as I can and count that as a single length. Fold the length in halves twice - this makes it easier and faster to wrap around the pom pom maker. Open one set of arms on the pom pom maker and wrap the raffia from one end of the arm to the other, all while consistently covering it. 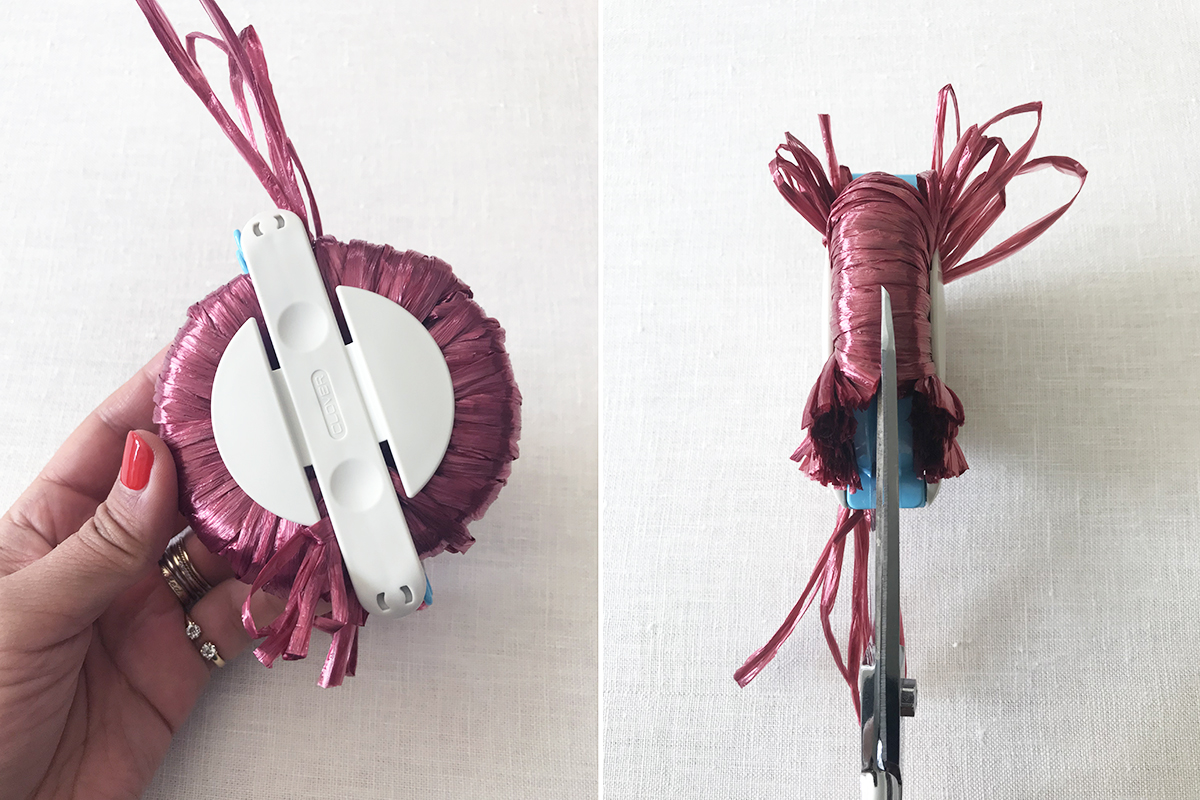 Close and repeat on the other set of arms. Run your scissors along the middle and cut around the entire pom pom maker. 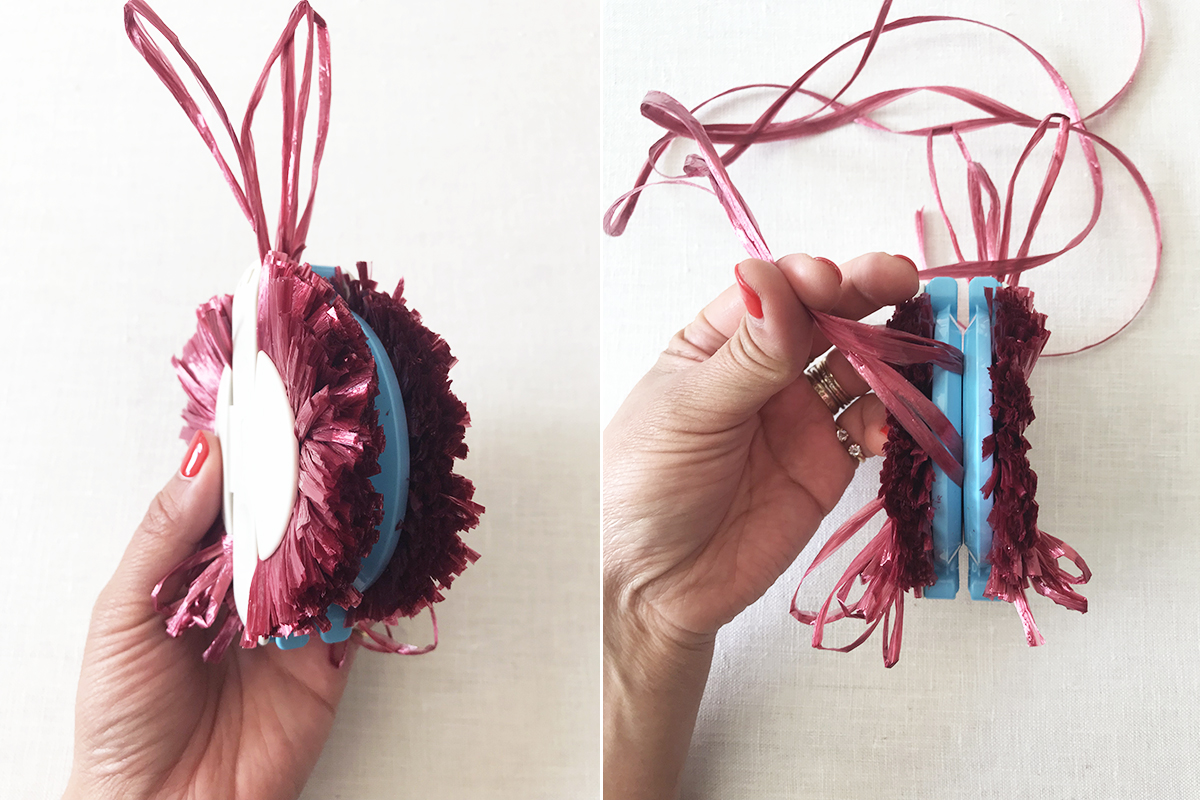 Cut a 12 inch piece of twine or raffia, fold it in half and slide it between the two halves. Pull it as tight as you can and then into a double knot. 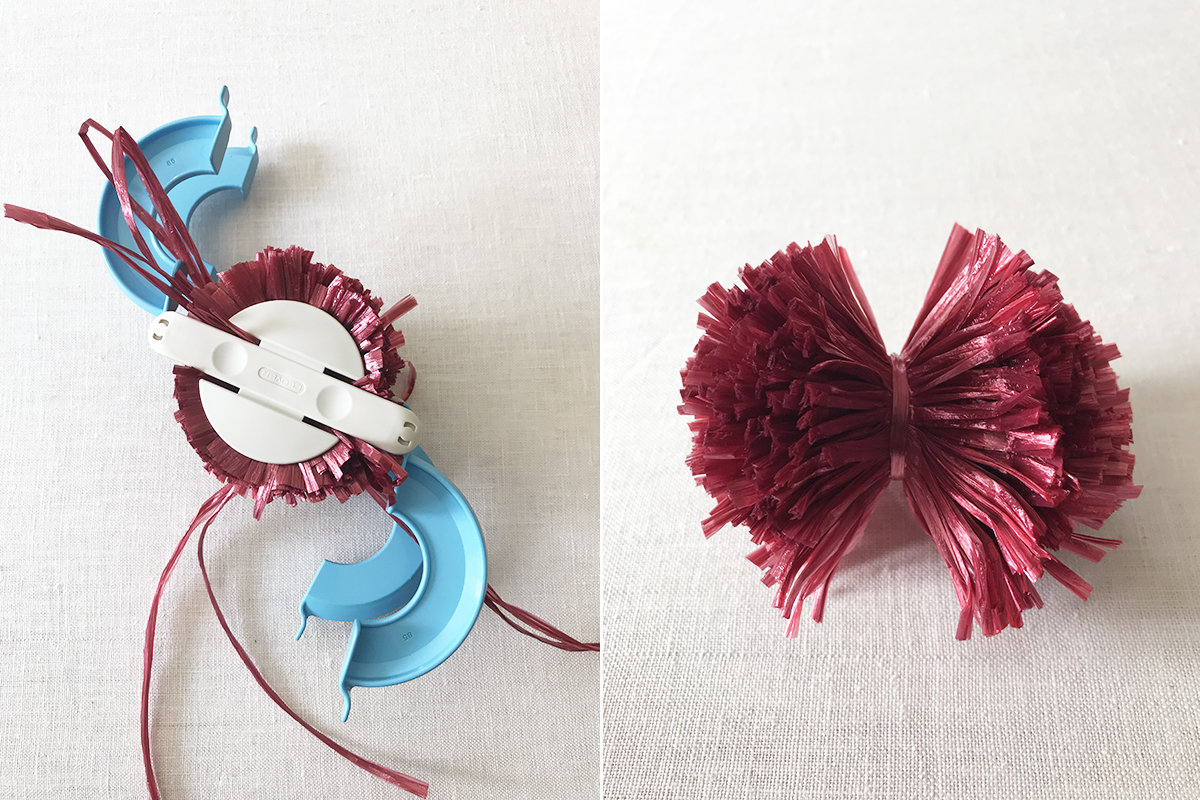 Release the pom pom from the maker and trim away any stray strands. You'll notice that it doesn't quite look like a yarn pom pom! It's because raffia is stiffer material so I've got a small trick to rounding it out. First, however, I like to go back around the center of the pom pom with a piece of kitchen twine and cinch the middle into another double knot. The reason why I use kitchen twine is because it’s thick and is able to really get a good grasp on the thick raffia. Anything thinner may not hold the pom pom together as tightly. I then go back and cut away the piece of raffia that was originally tied around the middle. 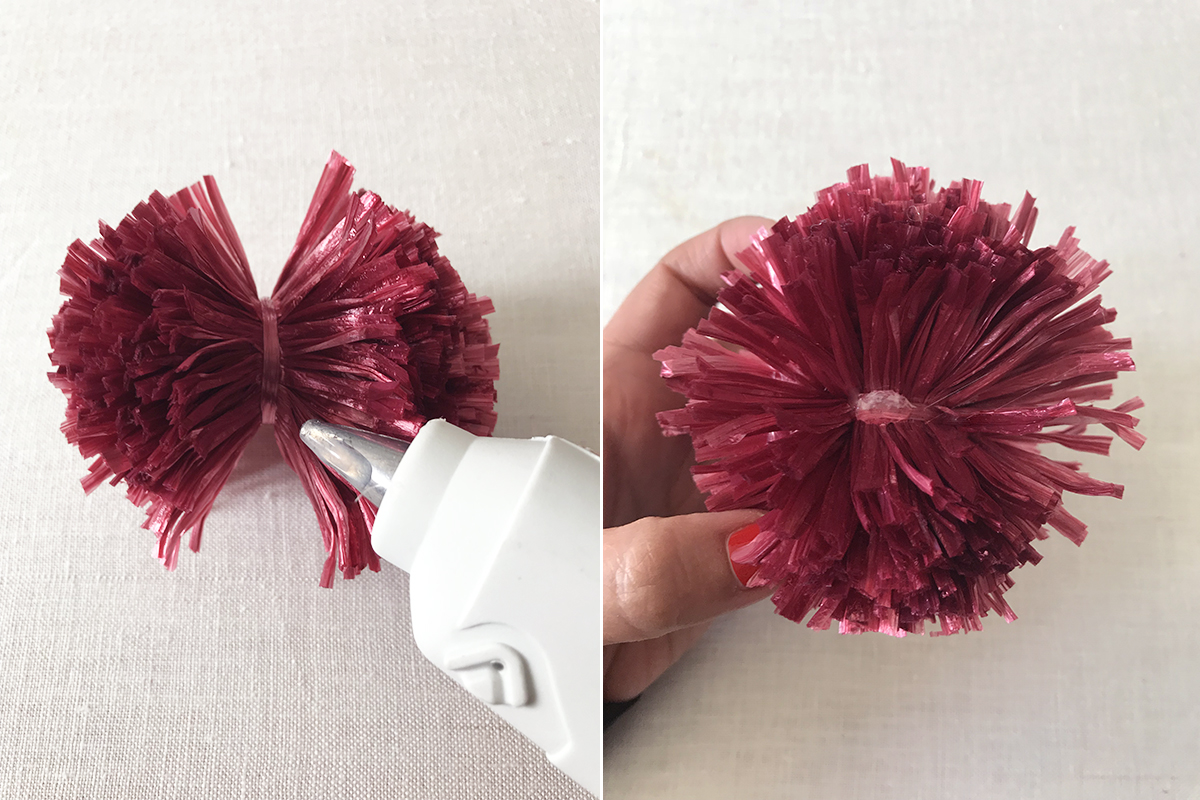 Place a large dot of hot glue around the middle.

Pinch the opposing strands together and hold until the glue dries. Continue glueing piece by piece around the entire diameter of the pom pom. Now, they're starting to look more round! Use your scissors to help shape the pom pom. 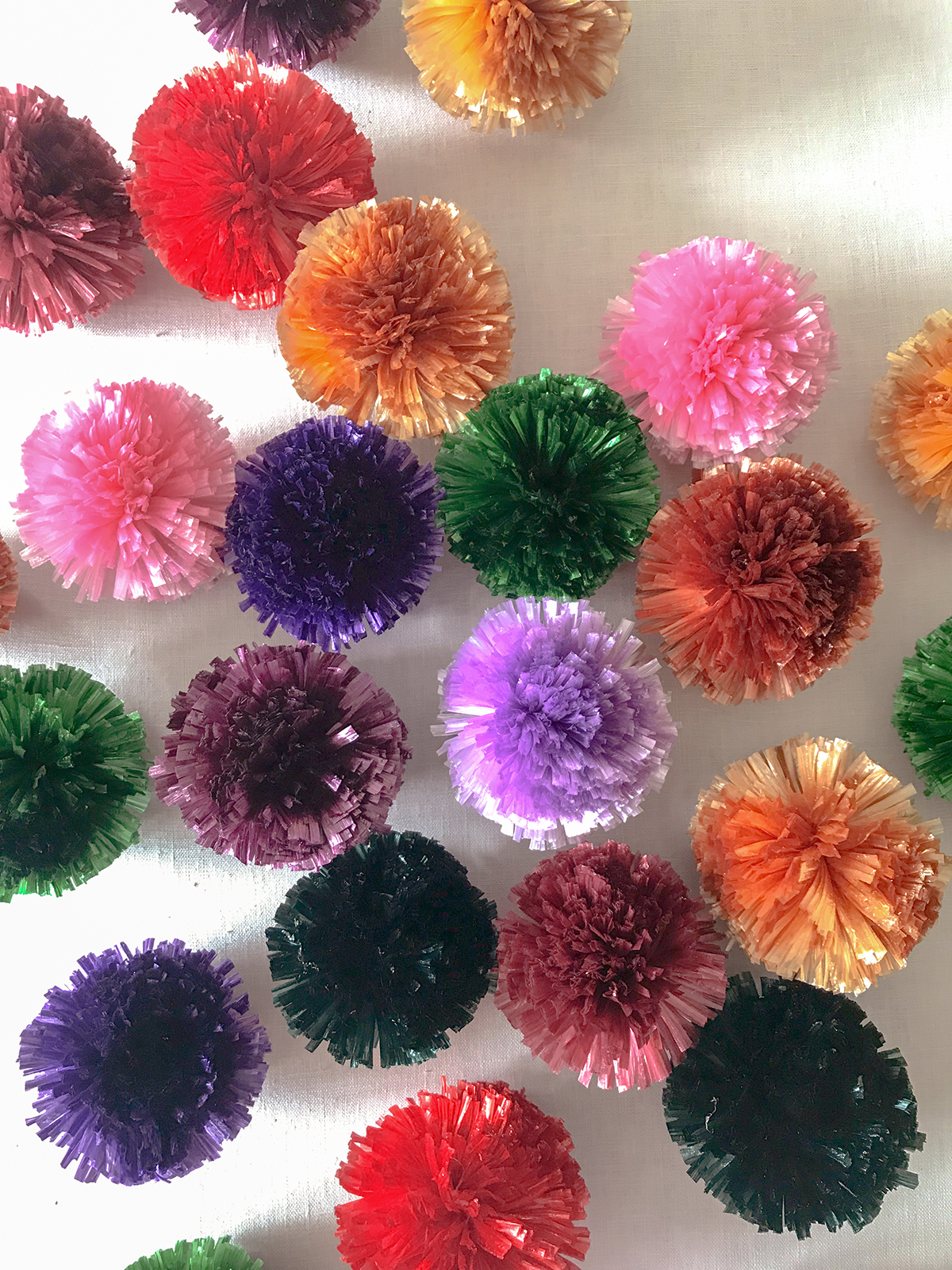 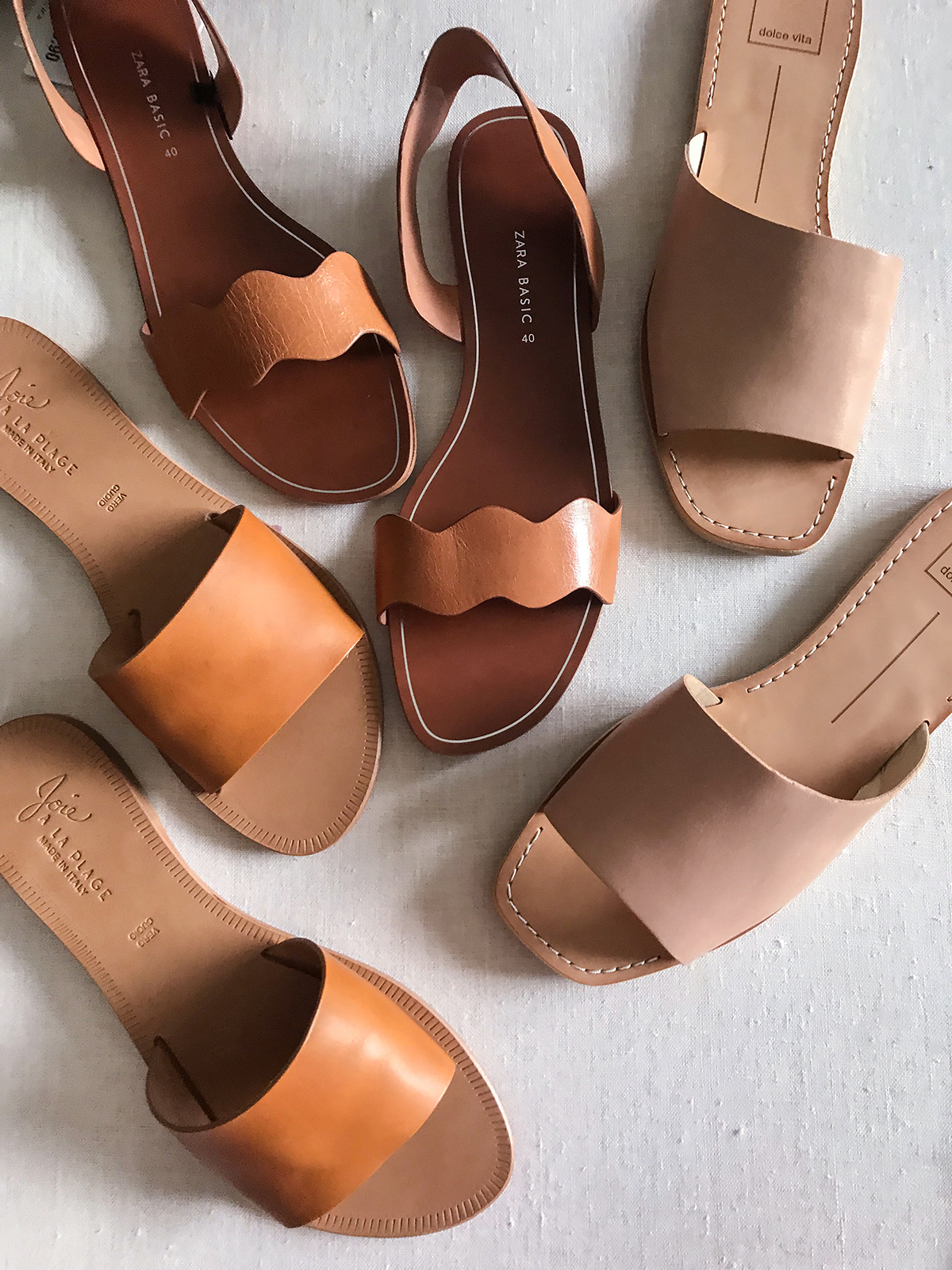 When choosing your sandals, make sure the strap isn't too wide so that when you place your pom poms across it, the strap will be revealed. These Joie sandals seemed to be the best pair out there under $100. Zara and Dolce Vita make great options too. 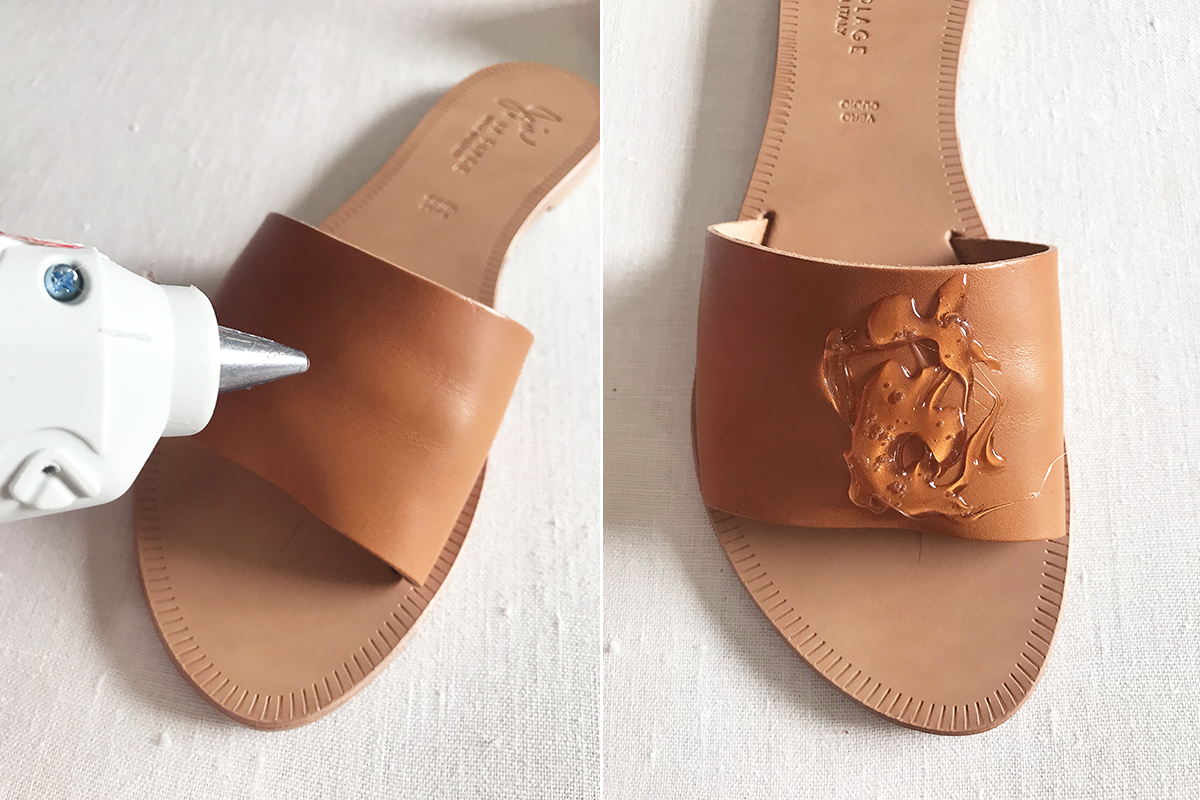 Start by squeezing a large amount of hot glue onto the middle of the sandal strap. 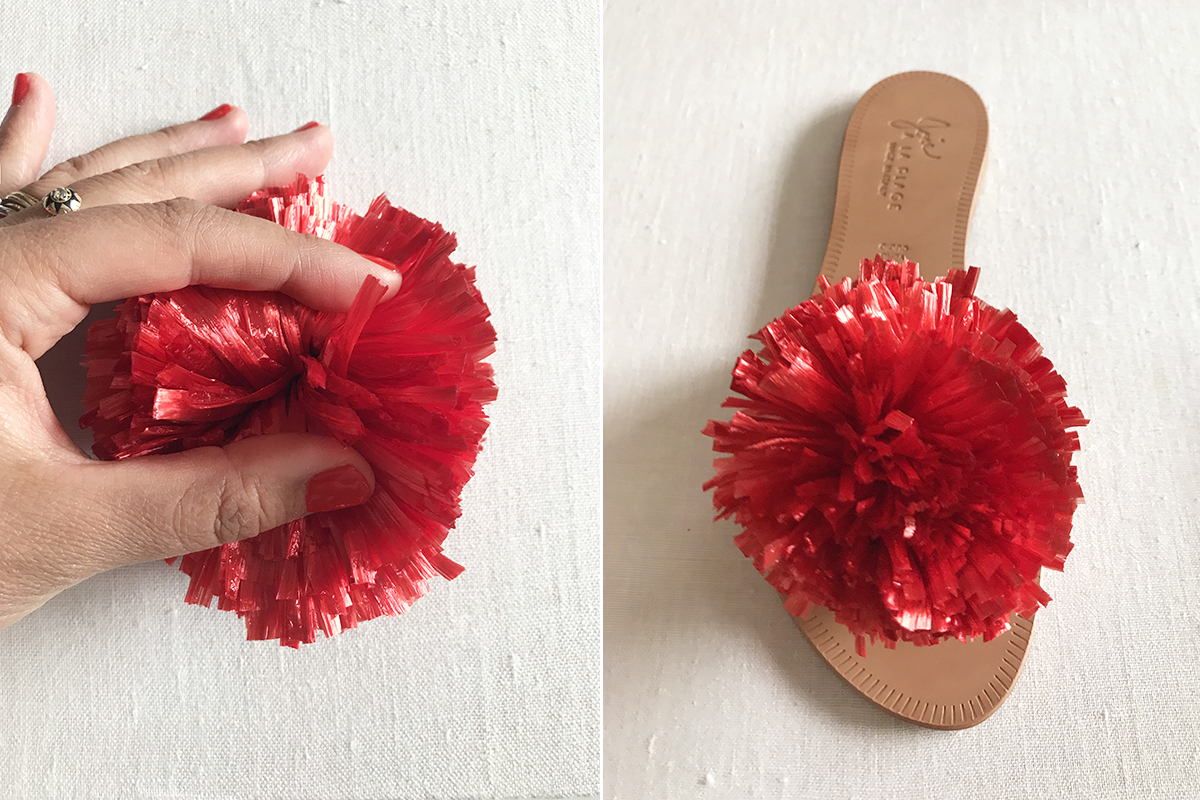 Working quickly, open the pom pom and find the center. Press is firmly against the strap and hold it there until it dries. 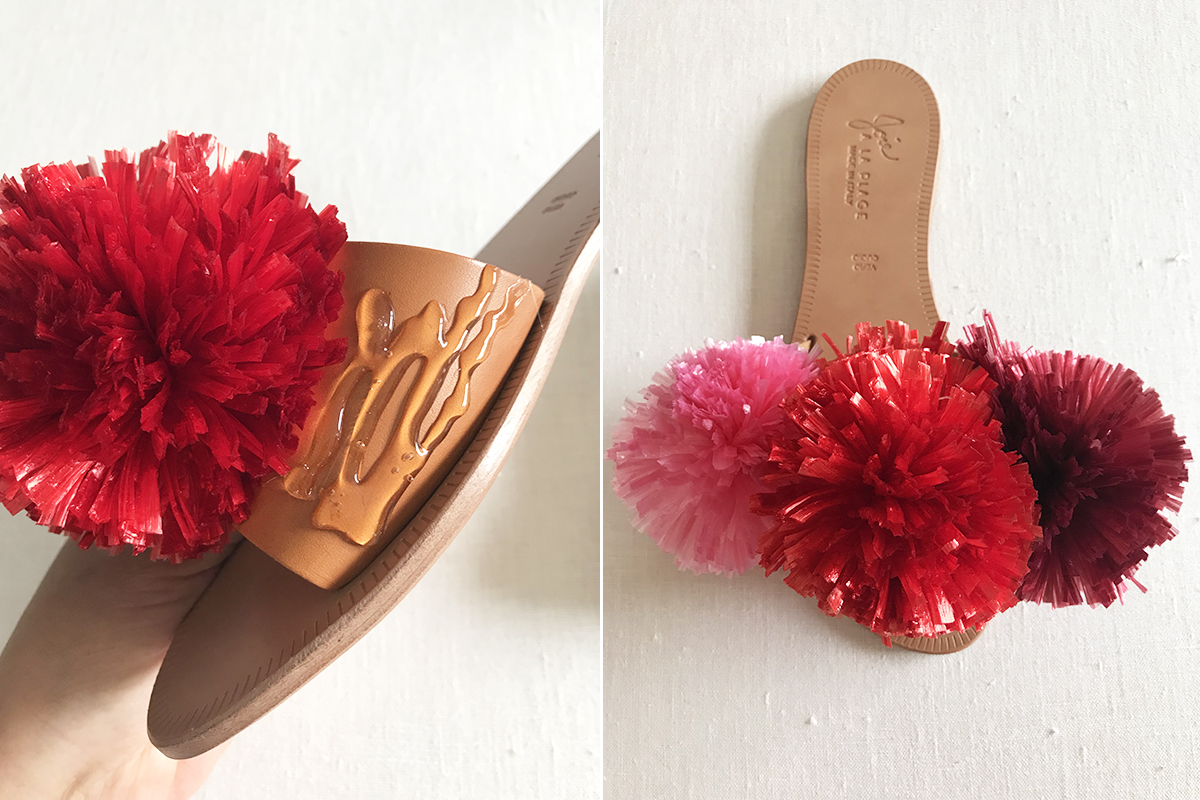 Add glue to the side of the sandal and repeat the steps. 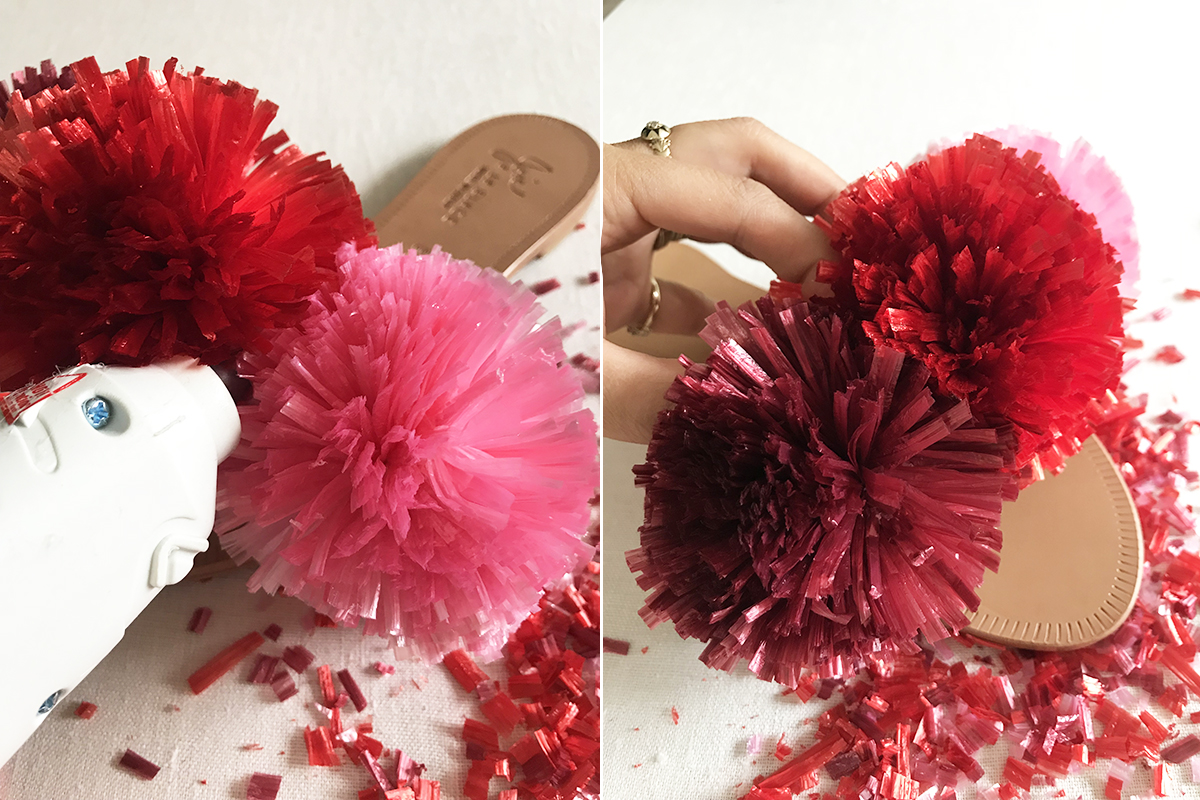 Some strands will pull out of place. Trim them away. Then, go back with your glue gun and squeeze hot glue in between the pom poms. This step is necessary as your pom pom will want to flop down to either side of the sandal and you don't want your poms to drag! 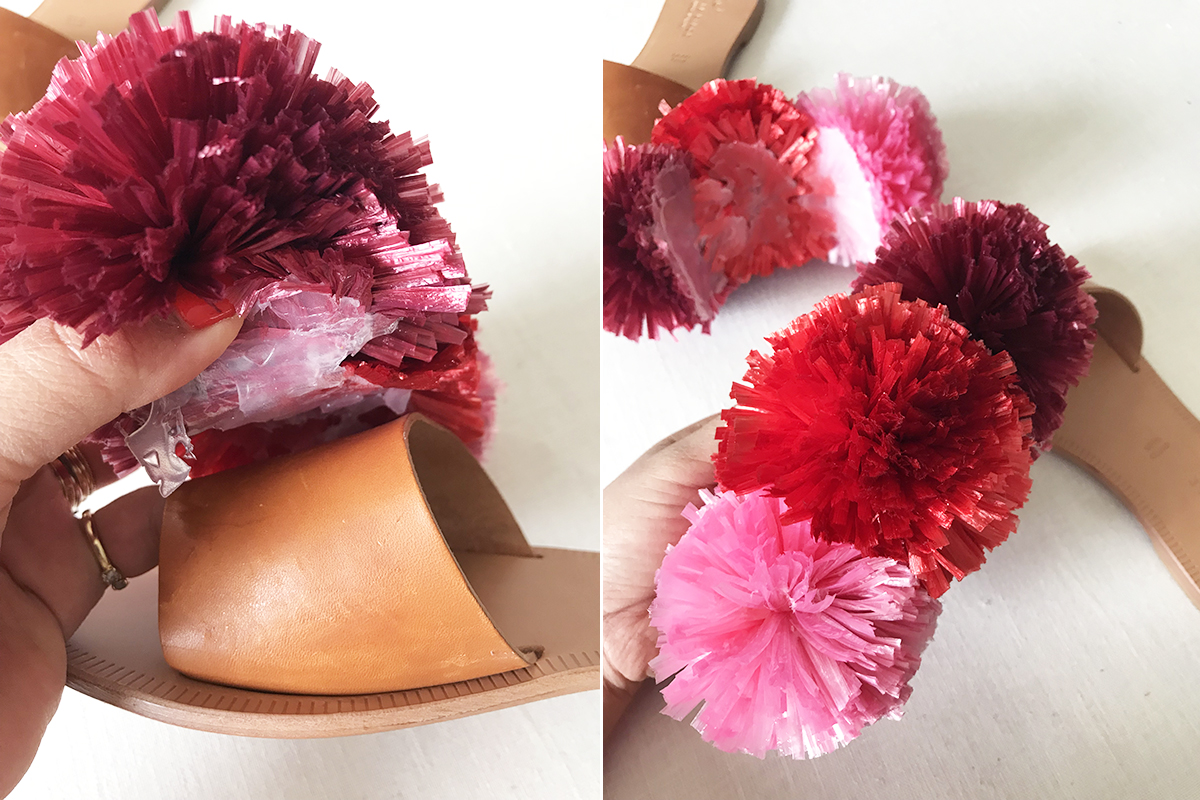 When the pom poms are completely dried, peel the pom poms away from the sandals. WHAT?!? WHY?? Hot glue won't permanently attach anything to leather. So adding hot glue is a great way to create a mold that dries quickly. If you were to use a stronger adhesive like E6000 from the start, you'd have to wait far too long to wait for everything to dry. 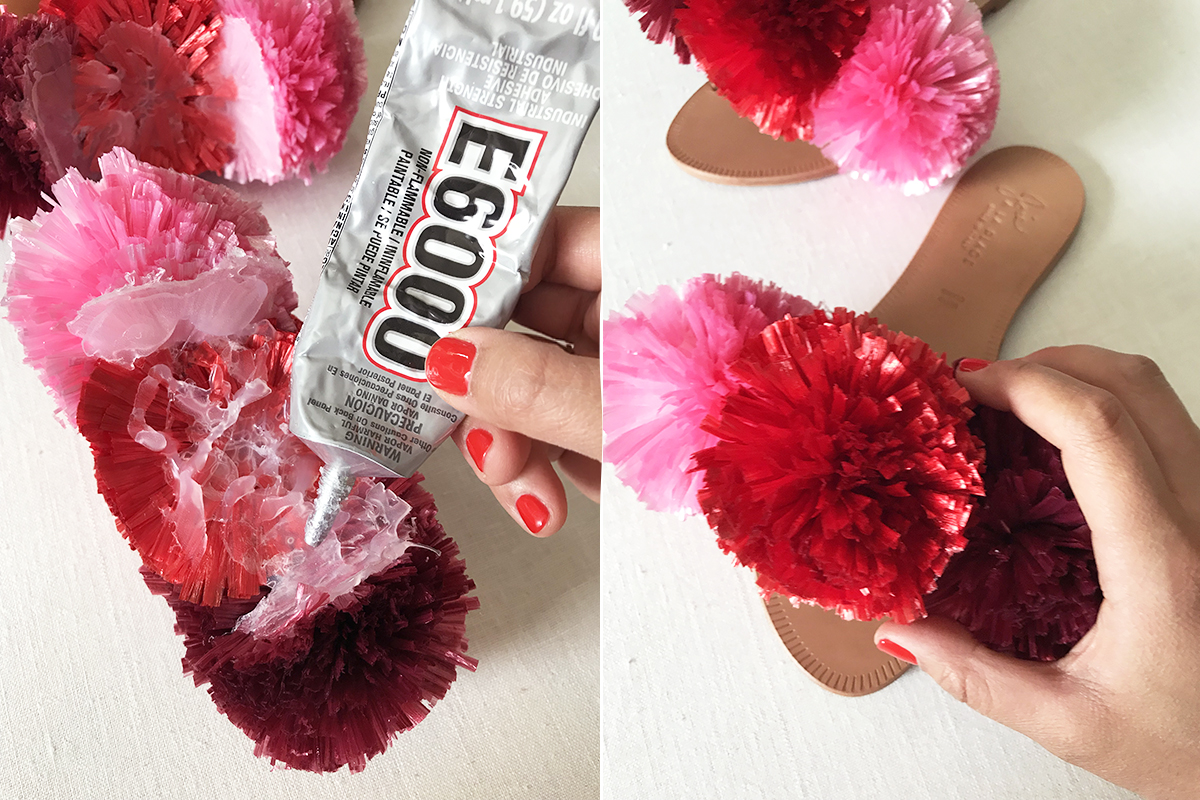 Once you've peeled your strip of pom poms off the sandals, add a good amount of E6000 to the back of the poms poms. Directly onto the dried hot glue is fine. Press is against the sandal strap and allow to dry for at least 4-6 hours. 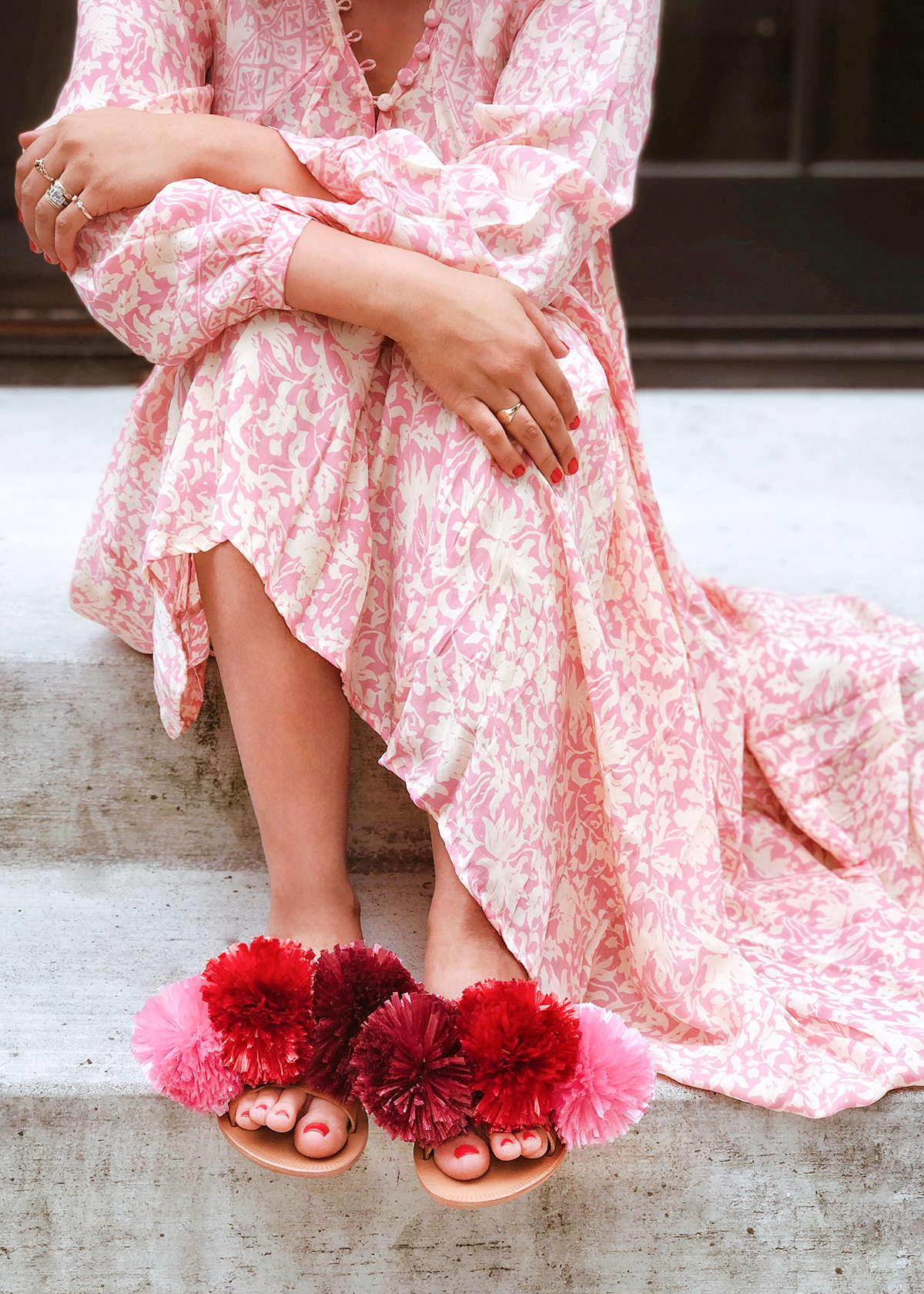 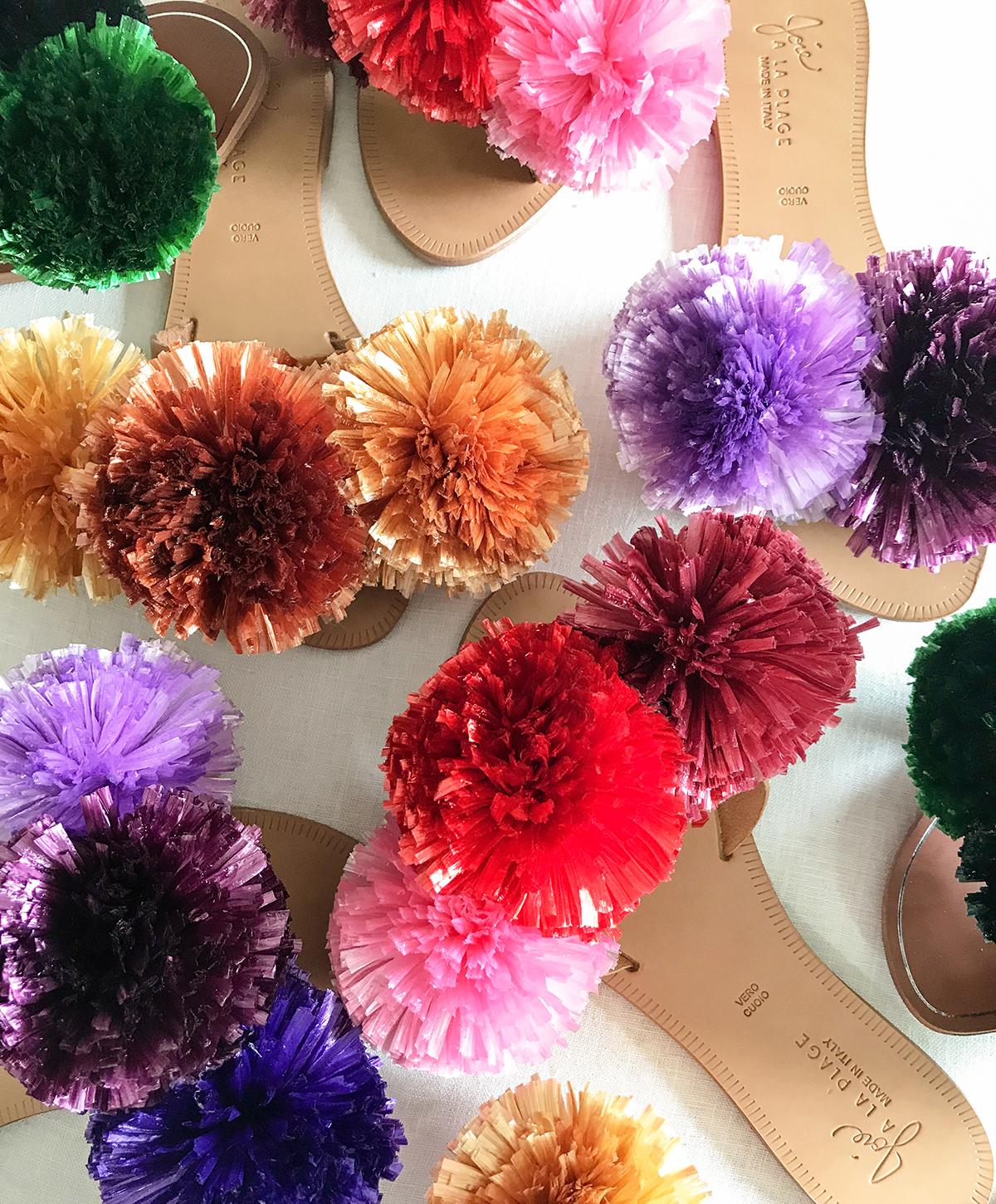 Voila! That's it! Be sure to share your creations with me using #HonestlyDIY!!! 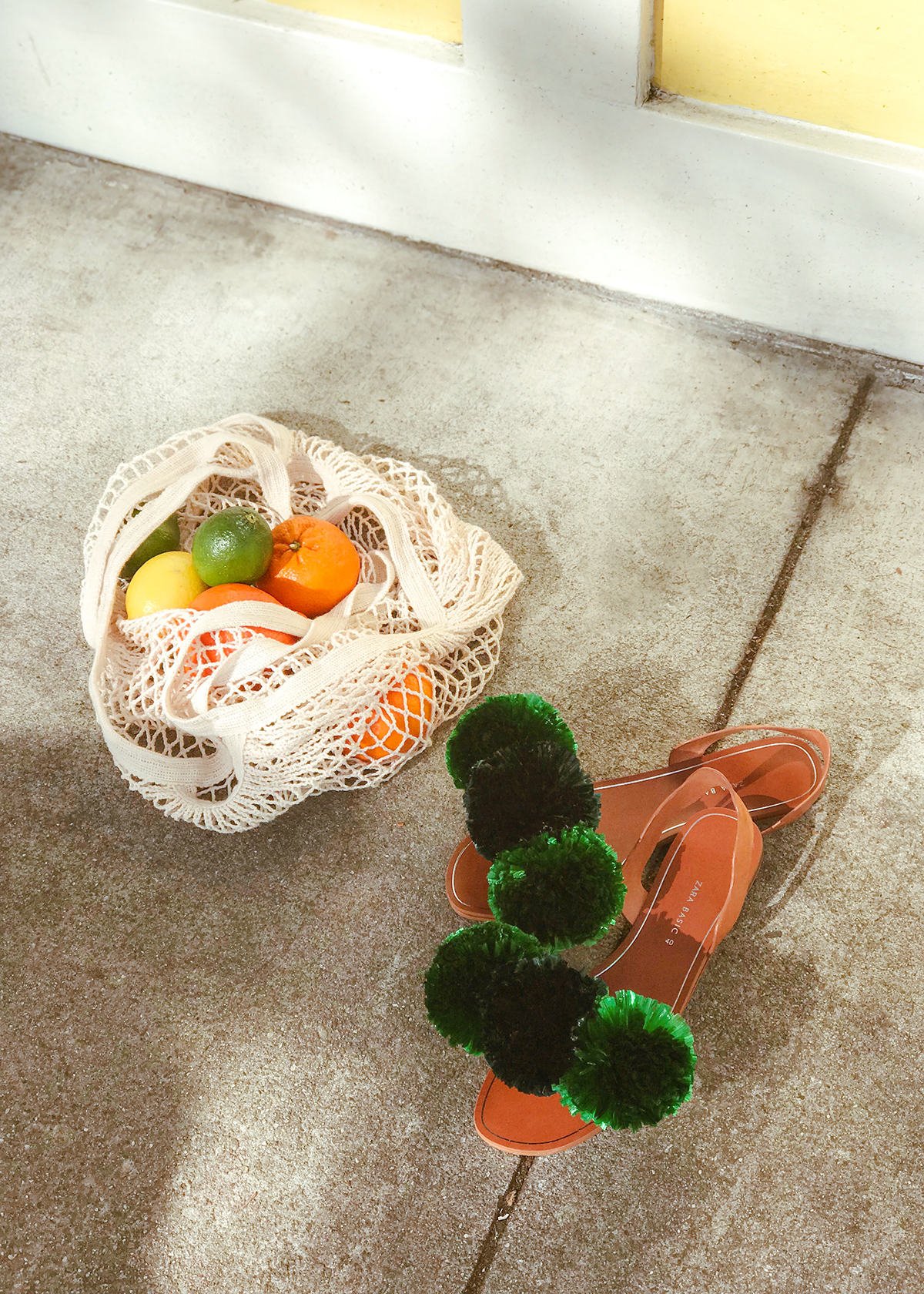 (images and tutorial by HonestlyWTF)